The following will give you information why we fight our fight in South East Asia.

CURRENT TRENDS IN HUMAN TRAFFICKING IN SOUTHEAST ASIA
(The following was taken from the Lowy Institute.)

To understand the current situation in Southeast Asia with respect to people smuggling and human trafficking, it is important to be clear about the distinction between the two. People smuggling is the act of moving people across borders into countries for which they have no authorised travel documents in order to obtain a financial benefit. Human trafficking is the act of moving people either internally or across borders through coercion or deception for the purpose of exploitation in the destination country. In the case of people smuggling, people are generally being moved voluntarily. In practice, however, the line between people smuggling and human trafficking is often blurred, especially in Southeast Asia.

In terms of border protection, the Australian Government has largely focused on refugee and migrant smuggling, more than on human trafficking. Specifically, the stress has been on irregular arrivals by sea from the Middle East, and South and Southeast Asia. The focus has also been on the people-smuggling networks in Southeast Asia that help facilitate these irregular movements to Australia. Human traffickers often share the same networks as people smugglers. Most irregular migrants from Afghanistan and Iran who have arrived in Australia in recent years have come via countries in Southeast Asia. In some cases, they have reached countries in Southeast Asia legally and are then smuggled (or sometimes trafficked) for the onward journey to Australia.

While human trafficking in Southeast Asia has relatively little impact on Australia directly, Australia has an interest in combating it, not least because it is linked to people smuggling. This was highlighted by the 2015 Rohingya crisis, where smuggled refugees and migrants from Myanmar and Bangladesh were abandoned in the Strait of Malacca and the Andaman Sea after a crackdown on human traffickers following the discovery of mass graves in jungle camps in Thailand. The main destination countries of the smuggled Rohingya refugees were Malaysia and Indonesia, as they are Muslim majority countries, with some intending to reach Australia.

Since human trafficking and people smuggling are closely interrelated, the so-called ‘push-down and pop-up’ effects of human trafficking have direct implications for migrant smuggling. When human traffickers or smugglers are pushed down by tough regulations and a strong stance on enforcement in one state, they move to another that has less rigorous controls. This is evident in many trafficking cases. If traffickers cannot move victims within Southeast Asia, they target neighbouring countries, including much richer or bigger countries such as Australia.

Human trafficking is a significant problem in Southeast Asia. The 2016 Trafficking in Persons Report, published annually by the US State Department, places Myanmar in its lowest tier ranking in terms of a country’s policy response to people trafficking (Tier 3), and Thailand and Malaysia in the second-lowest ranking of Tier 2 Watch List. But no country in Southeast Asia has a particularly good record of tackling human trafficking.

Tier 2
Countries whose governments do not fully comply with an TVPA’s minimum standards, but are making significant efforts to bring themselves into compliance with those standards.

Tier 3
Countries whose governments do not fully comply with the minimum standards and are not making significant efforts to do so.

The following is a Tier Chart of South East Asia Countries. 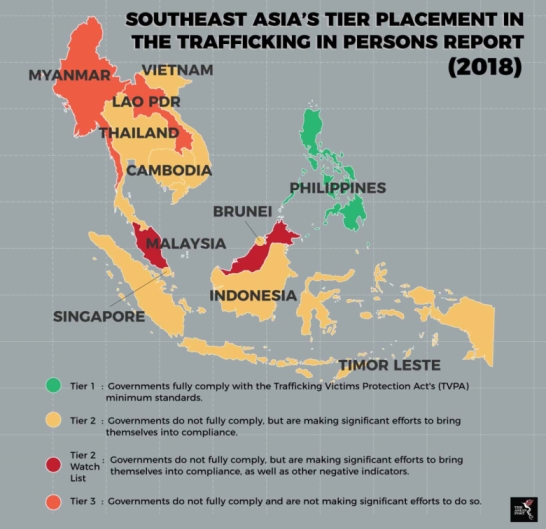 You can donate NOW to help our fight.
Donate Now!